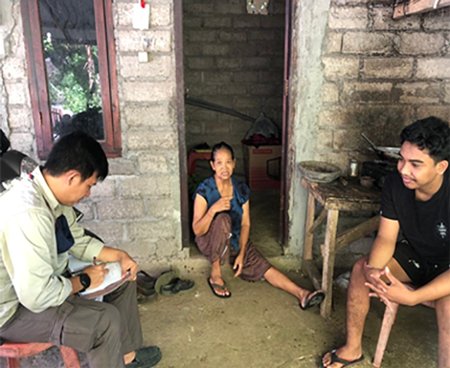 Thursday, 18 August 2022 / Published in All news, Meet our students

Meet Gede Jemi Wijaya one of our new students

Jemi lives in Butiang, Desa Les, the poorest neighborhood in the village. He was born in Tobadak, the remote area of Mamuju, South Sulawesi. He and his family were migrants in Sulawesi; his father worked there as a construction worker. Due to his mother’s prolonged illness, the whole family returned to Bali to start another chapter of their life on the so-called paradise Island.

However, just a few years after having moved to Bali, Jemi’s father passed away, leaving the whole family in a new location without a breadwinner.

Since then, the family of three (Jemi, his mother, and his brother) have been living in hardship. A few years back, his brother married and moved into his wife’s compound: this is called nyentana and is often done when the groom’s family is in a critical economic situation.

So young Jemi was left to take care of his mother, replacing the role of his father and that of his brother. Unfortunately, his mother was diagnosed with chronic diabetes, and her condition worsens by the day. The last time we visited Jemi, his mother had already lost her sight.

Jemi is passionate about working in the culinary sector. However, given the situation, it has been and still is extremely difficult for Jemi, who recently graduated from high school, to afford any education at a higher level.

While in Sulawesi, Jemi experienced what it is like to live in a different culture and understands that life can be different. Jemi is a young man who dreams of running a culinary business one day. As he said, “My mother and I tasted bitter living conditions every day for so many years, then I deserve the right to change it”